Do you see yourself on trial with Oskar Groening? Look again.

Oskar Groening is 93 years old. He has admitted to being an 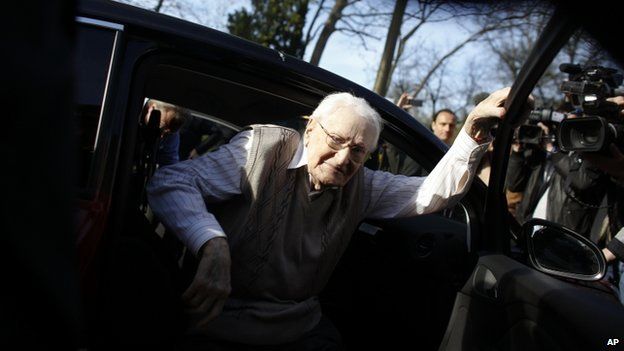 accessory to the slaughter of hundreds of thousands of Jews at the Nazi Auschwitz-Birkenau complex in Poland in 1944. He is currently on trial for his role in the genocide but the prospect of a prison sentence does not seem to matter much. What matters is his public acknowledgement of the truth.

Why does it matter now?

But Oskar Groening matters too. He’s a real person with a horrific past and a certain future as death approaches.  What is uncertain is whether or not he will be found criminally guilty in a court of law. But everyone, including Groening, knows he’s guilty in the way that matters most.

Groening has confessed his moral guilt and he has asked for forgiveness. That’s good for the soul no matter how horrific the sin. No, it doesn’t make up for what happened. But then, nothing ever could.

The BBC report says that:

Addressing the judges, Mr. Groening also said: “I ask for forgiveness. I share morally in the guilt but whether I am guilty under criminal law, you will have to decide.”

According to those at the trial, Groening spoke for more than hour while survivors and families whose loved ones died in the notorious death camp sat across the room from him.

Groening is telling his story — as horrific as it is — because some people deny the holocaust ever happened. That’s another reason that the telling the truth matters: it keeps us honest about reality.

Now 93, Groening was 21 when he joined the SS. Look at his picture. 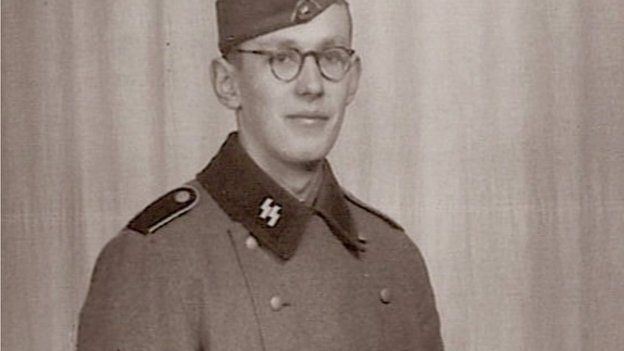 This is the face of the man that greeted train loads of people who had rousted from their homes and herded like animals across the country.

This is the face of the man who “accounted” for their money.

This is the face of the man who watched them separated, stripped of their shoes and marched into the gas chambers.

This is the face of the man who admits to seeing the crematoria and knowing what was happening to the nearly half a million people he “processed” in 1944.

Whether or not what he “did” rises to the level of criminal conviction is up to the court. What is clear is that what he failed to do, what he allowed to happen,- the evil he did not resist, leaves him morally guilty, and he knows it.

This story raises a host of story lines:

The one thread I want to pull here is that of sins of commission and sins of omission.

It is my observation that people generally try to live well and do good. The Golden Rule is a fairly pervasive measure of the “right” way to live. We may not always succeed in doing unto others as we would have them do unto us, but for the most part, we try.

But what about all the good we might have done that we failed to do?  We obsess about the sins of commission — the naughty things that we and others do that require confession, repentance and sometimes restitution. But what about the sins of omission?  Who is keeping an account of all the missed opportunities? What is the good you might have done today but you failed to do? You didn’t actually “do” anything wrong because you didn’t actually “do” anything.

Oskar Groening is guilty of the sin of omission. He may not have actively participated in gassing people, but he watched and he counted their money and he watched them walk into gas chambers and he listened to them scream and he did nothing.

What about us?  What genocide or religious cleansing or holocaust are we witnessing with our eyes in our own times while doing nothing?

Groening admits his moral guilt and the time has passed when he can do anything about the holocaust he allowed on his watch. Do we admit our moral guilt and we will intervene to keep religious minorities in the Middle East from being exterminated?

If you don’t see yourself on trial in the person of Oskar Groening, look again.

What can you do?

Do not deny the truth of what is happening.

Do not live as if others are not dying.

Give as much as you can to those who are striving to live.

Stand up, speak up, and participate in solution making.

I have no problem with Oskar Grouning going on trial, or receiving the death penalty. I am concerned about the tendency to have “selective moral outrage”. Soviet atrocities, as well as Cambodian, to name a couple, never receive the same level of “fervor” in our quest for justice.

“Everyone to whom much was given, of him much will be required, and from him to whom they entrusted much, they will demand the more.” (Luke 12.48)

And yet we know that God loves Oskar Groenig as much as he loves our grandchildren.

**And yet we know that God loves Oskar Groenig as much as he loves our grandchildren.**

Tell that to those families who have lost loved ones murdered by his association of killers, and what about the Scripture?? God is angry with the wicked everyday. You make it sound like this murderer of the Jews will be forgiven by asking forgiveness;in whose name? Does he know Christ as Savior and Lord?? Has he truly repented or is he tormented knowing he will be thrown in the Lake of Fire, Rev. chapters 20 and 21? Tell me please??

Psalm 7:10-12 which reads, My defence is of God, which saves the upright in heart. God judges the righteous, and God is angry with the wicked every day. If he turns not, he will whet his sword; he has bent his bow, and made it ready.

So what I said is wrong? God does not love all of us?

The case of Mr. Grouning creates a moral dilemma for anyone with a conscience. Accountability is important, but so is forgiveness. Grace is theologically sound Christianity, but cheap grace is a mockery to justice. Such dilemmas are good for us to wrestle with, whether or not we ever agree. All of us like to think we would take the moral high ground, but in truth none of us can say for certain that we always have, or always will. The Layman recently had an article about John Leith. He once said, “The sin in good deeds is thinking they have earned us something.” The terrible truth is, unless atrocities touch us personally, most of us do little more than express outrage.